Picture of the Week 6

Posted on February 12, 2012 by wolfgangbluhmphotography 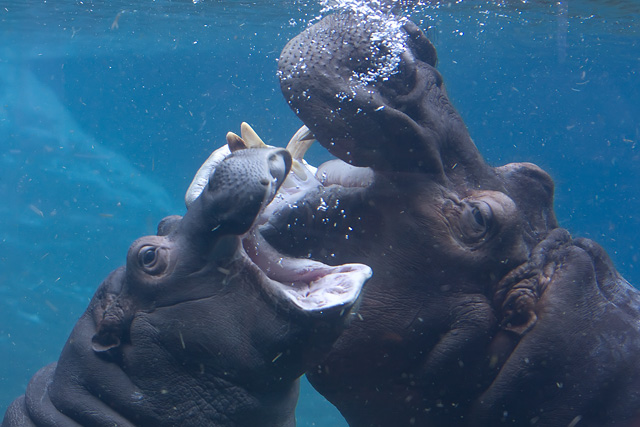 We spent an early Saturday morning at the San Diego Zoo, one of the benefits of our “Keeper’s Club” membership. We certainly enjoyed the relative absence of the large crowds that later in the day descend on this famous tourist attraction.

One of the exhibits we visited was the hippo pool, and we were treated to a spectacular display of a playful baby hippo taking full advantage of its rather patient mother. The baby frolicked around and bounced up and down on its mother, enjoying the benefits of buoyancy under water.

Since there were relatively few visitors, I had the luxury of photographing them with few obstructions for quite some time. Mother and baby had been facing off for a while with mouths wide open, drifting back and forth across the windows. Once in a while, either one would blow a stream of air bubbles. I never quite got the “perfect” shot I had in mind, but I got close.

On a technical note, you are likely to encounter strong green tints in underwater shots like this. Since I always shoot in raw, I was able to easily color correct in the raw-to-jpeg conversion. If you are shooting jpeg, you’ll have to find another way to fix the color cast, such as using the channel mixer and reducing blue and green and increasing red.

1 Response to Picture of the Week 6